Data expertise is creating a bottleneck in the progression of multi-omic analysis. Complex data analysis workflows consist of diverse components that need to be weaved into end-to-end solutions. Users often need to use custom scripting to perform integration and higher-order orchestration of these individual workflows. Seven Bridges RHEO gives users a practical, immediate solution to their productivity and quality control challenges.

Seven Bridges RHEO streamlines analysis workflows by minimizing the number of manual steps required to set up, run, and conclude an analysis. RHEO allows users to capture the entire flow, from data ingress to final results, and store those results where they are needed. Seven Bridges RHEO allows a broad range of users with differing skill sets to benefit from the technology’s push-of-a-button simplicity when running workflows and extracting essential information. Running multi-omic analysis workflows is a more intuitive, user-friendly experience for a wider mix of end-users with varying levels of expertise. 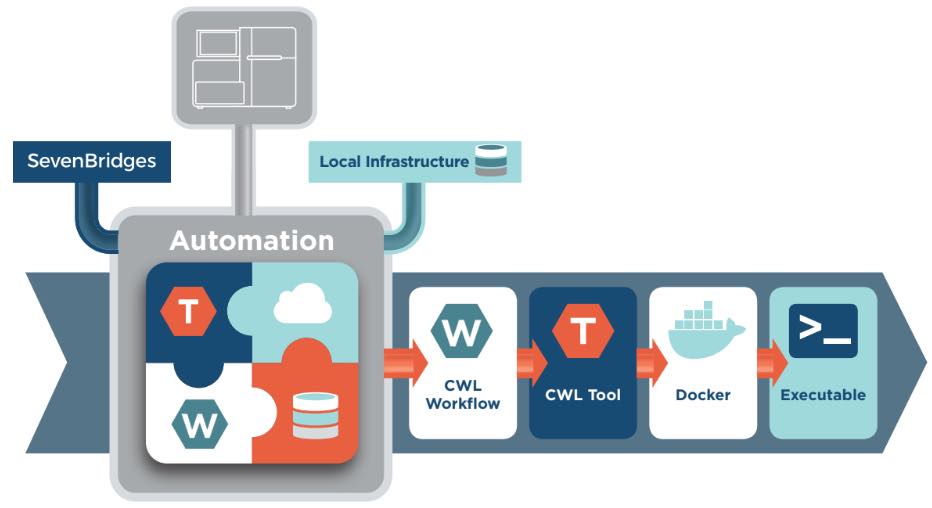 With RHEO, developers can use the Seven Bridges Automation Development Kit (ADK) to write automation code and deploy it as a push-button solution. Automation scripts are developed locally in Python and then deployed to the Seven Bridges Platform, after which they can be managed with an auto-generated RHEO Visual Interface (GUI), dedicated Seven Bridges Application Programming Interface (API) calls, or Command Line Interface (CLI) commands. In order to meet the needs of all our users, automations can be run on local infrastructure in which case platform deployment is not necessary.

To learn more about the process of setting up an Automation, consult RHEO for developers. Also, to get familiar with Automation terminology, please consult our RHEO glossary.

Python libraries are used to accelerate automation script development. Automation scripts written with the ADK are also deployable and executable on the Seven Bridges Platform.

The platform uses a hierarchy of different automation entities to help organize your analyses.

An automation is a container with all relevant information pertaining to one automation, such as its name, members, and code packages. Each automation has at least one administrator who manages automation members and controls their permissions.

A code package contains the actual code package file (a .zip file) with instructions on executing an analysis, information on the version of the script that’s being run, the time and date the code package was registered, and other pertinent information.

An automation run is an execution of a code package that also includes all relevant information about that execution.

The code example below illustrates a part of a typical automation script. The task is to loop over a set of samples, process each of them, and collect per-sample results at the end. Inside the loop, the script dispatches CWL apps for execution to the Seven Bridges Platform. Execution is performed in parallel through the use of promises (also known as futures) that allow the building of the entire execution graph at runtime and before execution starts.

Step dependencies are established by simple step input/output assignments, which can be direct or indirect. In the example code, promises are collected in a list before being passed on to the final ‘ExportFiles’ step. This last step executes as soon as all samples have finished processing and then exports all results in bulk to their final destination.

Conditional executions reduce to simple IF statements, illustrated in the example with the use of an optional duplicate marking step. The switch is controlled by an automation setting that can be overridden at runtime.

Both per-sample processing steps in this example (AlignmentStep and DeduplicationStep) execute as CWL apps on the Seven Bridges Platform. Even though samples are looped over one by one, all BWA alignments will execute simultaneously, which is possible because steps are executed asynchronously and script processing continues after a step is instantiated due to the use of promises (also known as futures). This way, the entire execution graph can be built on the fly and steps start executing in parallel as soon as all step inputs become available.

Note how step dependencies are inferred implicitly from simple input/output assignments. In this example, the input BAM file of the DeduplicationStep step is assigned the output BAM file of the AlignmentStep step, which establishes a dependency between those two steps. Similarly, the list of input BAM files of the ExportFiles step is assigned the list of output BAM files collected inside the loop. Each downstream step starts executing automatically as soon as all its inputs become available.

The last step ExportFiles exports all generated BAM files in bulk to the specified location on the Seven Bridges volume. It is only one of many steps implemented inside the ADK to help with common Platform operations. If an ADK step is not available for the desired operation, SBApi() gives direct access to the underlying Seven Bridges Public API. Finally, the list of generated BAM files is assigned to the Main step's output named processed_bam_files, which makes these files available as clickable entities on the visual interface. 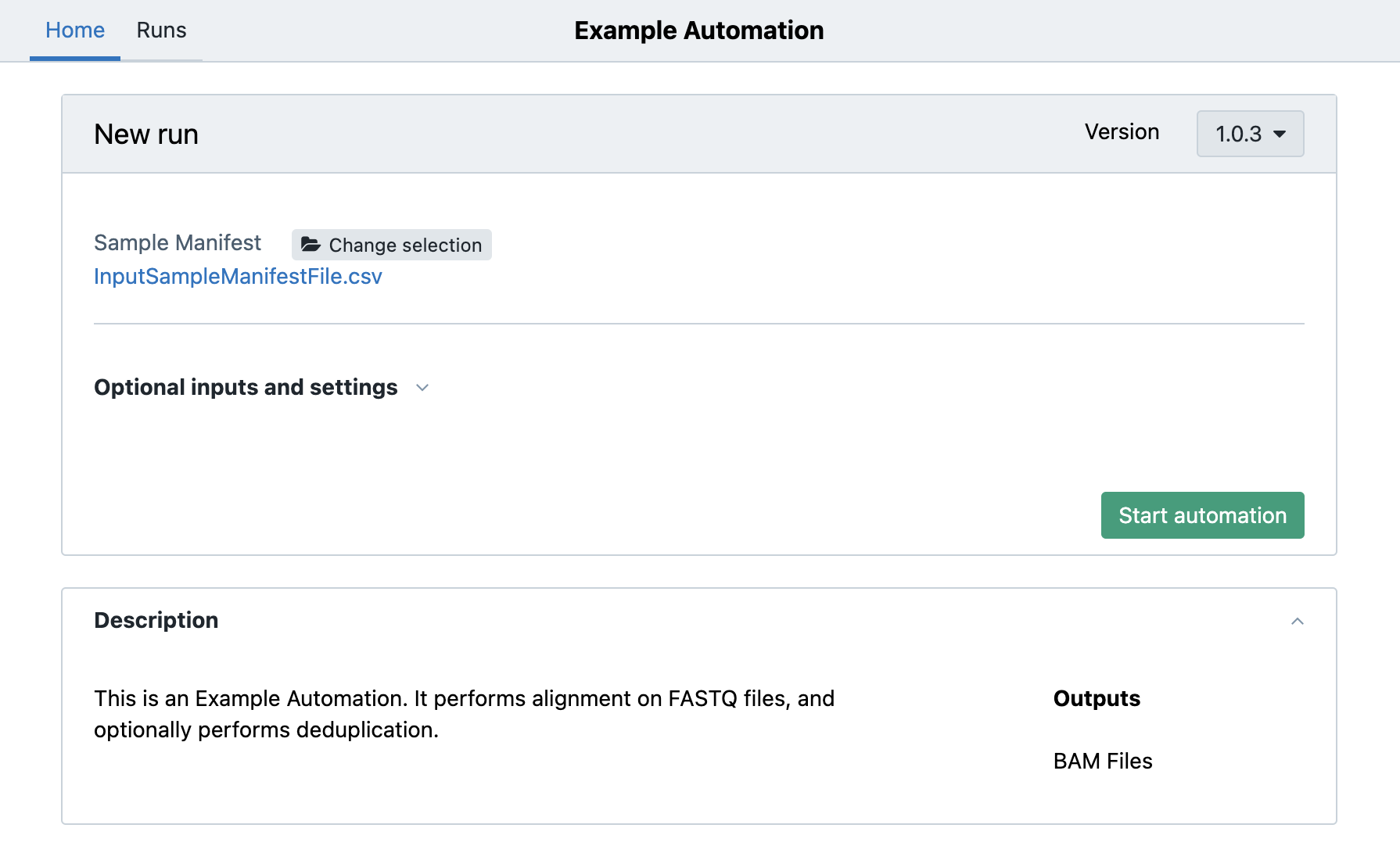 Input files can be conveniently selected with a file picker and can be located in a Seven Bridges project or picked directly from your connected cloud storage. Hyperlinks allow quick navigation to other entities on the Seven Bridges Platform, including files, folders, projects, or tasks.

The automation visual interface also provides easy access to past and current automation runs. There is no question about what exactly was executed when or by whom. Previous automation runs can be re-run with same or modified inputs with only a few mouse clicks.

Common Workflow Language (CWL) is used for describing workflows in an environment-agnostic and portable manner. The main goal of RHEO is to either simplify or completely automate CWL workflows by integrating them into your custom environment. ADK scripts written for that purpose can be deployed and run on the Seven Bridges Platform, just like regular CWL workflows. Seven Bridges recommends implementing control logic in CWL to maximize portability and computational efficiency. The more control flow logic you put into automation code, the more the ADK becomes its own workflow language. However, this is not the primary purpose of the ADK and we do not recommend it as a substitute for CWL workflows.

Seven Bridges RHEO will help you:

Fast-track convergence on meaningful discoveries and, in turn, product-to-market timelines.

Reduce the number of lines of code by up to 80%.

See for yourself how easy it is to streamline and automate your data analysis. For more information on Seven Bridges, please visit sevenbridges.com or contact [email protected]

You can manage your Automation either via visual interface (GUI), CLI or API. For example, you can start or stop an Automation, define Automation members, access the log files, etc. Learn more: