In addition, Seven Bridges provides both a Python library as well as an R library to allow your scripts to interact with the Platform via this API.

The paths are structured into the following endpoints, which cover different categories of activity on the Platform:

API requests are made over HTTP, and information is received and sent in JSON format. For this reason, you should set both the accept and the content header of the request to application/json.

Responses also include Platform-specific error codes, in addition to standard HTTP codes. Information about each code is available on the page API status codes.

All API calls take the optional query parameter fields. This parameter enables you to specify the fields you want to be returned when listing resources (e.g. all your projects) or getting details of a specific resource (e.g. a given project).

The fields parameter can be used in the following ways:

Project short names are based on the name you give to a project when you create it. The short name is derived from the project name by:

For example, if I name my project 'RFranklin's experiments', it would be automatically assigned the shortname 'rfranklins-experiments'.
You can optionally override an auto-assigned short names to one of your choice, when you create a project. However, once the project has been created, its short name will be immutable. To create your own project short name, first create a project, using the drop-down menu at the top of the screen. Then, click the pencil icon on the Create a project pop-out window. 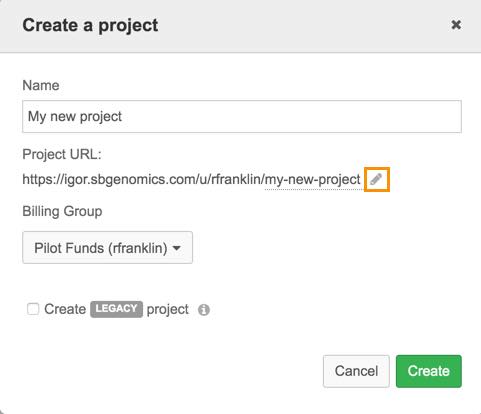 The Seven Bridges Public Reference Files repository is specified in the same way as a project on the Platform by an id of admin/sbg-public-data.

Seven Bridges Platform Users are referred to in the API by their usernames. These are chosen by the user at the point at which they sign up for the Platform. Usernames are unique and immutable. They are also case sensitive, so it is advisable to user lower case strings for your username to avoid ambiguity.

Every project is uniquely identified by {project_owner_username}/{shortname}.

Apps (tools and workflows) in projects can be accessed using the API. Like projects, apps have both given names, which are assigned by the users who create them, and short names An app's short name is derived by the same process as a project's short name.

Each app is identified with reference to the project it is contained in and its short name, using the format: {project_owner}/{project}/{app_short_name}/{revision_number}.

For instance, RFranklin/my-project/bamtools-merge-2-4-0/0 identifies an app.

Tasks are referred to in the API calls by IDs. These are hexadecimal strings (UUIDs) assigned to tasks. You can retrieve them by making the API call to GET tasks.

Files are referred to in API calls by IDs. These are hexadecimal strings assigned to files. You can retrieve them by making the API call to GET files.

Note that file IDs are dependent on the project the file is stored in. If you copy a file to a different project, it will have a new ID in this project.

In calls that return CWL descriptions of tasks, such as the call to GET task details, files are identified by their path objects. The file path is identical to the file ID.

Task inputs are specified as dictionaries. They pair apps to be executed in the task with the objects that will be inputted to them.

The following are all examples of inputs:

3: File inputs for a Whole Exome Sequencing workflow, in the form of FASTQ reads:

For more examples of task inputs, use the call to GET task inputs for some of the tasks you initiate on the Seven Bridges Platform visual interface.

For finding which app receives which inputs and their format, you can review the app's page on the Seven Bridges Platform visual interface. For example Whole Exome Sequencing - BWA + GATK 4.0

To set your Platform credentials on the API, you will need an authentication token from the developer dashboard.

All API requests need to have the HTTP header X-SBG-Auth-Token which you should set to your authentication token. The only call which is exempt from this is the '/' call to list all request paths.

The API rate limit is a limit to the number of calls you can send to the Seven Bridges public API within a defined time frame (learn more).

All API calls take the pagination query parameters limit and offset to control the number of items returned in a response. These are useful if you are returning information about a resource with many items, such as a list of many files in a project.

In addition to controlling the number of items returned using the pagination query parameters, if you are requesting information about files using the call to GET files you can filter items returned by filename, metadata, or originating task.

Specify the number of items to return in a response

You can control how many items are returned by an API call using the query parameter limit. If you do not specify a value for limit in a call, a maximum of 50 items will be returned by the call by default.

The maximum value for the query parameter limit is 100.

Example 1:
Suppose you have 70 files in the project my-project, and you issue the call to GET files as follows:

Since no value for limit was specified, this call will return details of 50 of the files, along with a URL to return the next 20.

Example 2:
Again, suppose you have a project my-project with 70 files in it. The following call will return details of all 70 files"

Specify the starting point for items to return in a response

You can control the starting point at which to start returning items in an API call using the query parameter offset. If you do not specify a value for offset then the default starting point will be the first item in the specified resource.

Example 1:
Suppose you have a project called my-project containing 70 files, and you want to return their details, starting with the 30th file. To do this, issue the call to GET /files with a query parameter offset specified as follows:

Calls made with the offset query parameter additionally return the header X-Total-Matching-Query which signifies the total number of results.

Example 2:
An example of a call made using both pagination parameters is as follows:

This returns the following body in JSON:

The headers returned include X-Total-Matching-Query which lists the total number of results.
The body of the response includes the array links, which indicate how to get the next or previous set of results.